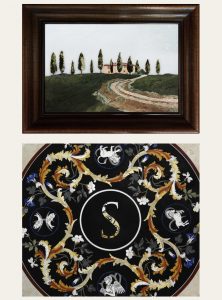 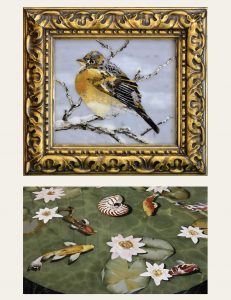 We were lucky to visit Pitti Mosaici – a workshop in Florence, Italy which still uses 500 year old techniques to create these amazing stone art works and see for ourselves how this art is made.

The official description of Pietra Dura is that it is an inlay technique of using cut and fitted, highly polished colored stones to create images. It is considered a decorative art. The stonework, is glued stone-by-stone to a substrate after having previously been “sliced and cut in different shape sections; and then assembled together so precisely that the contact between each section was practically invisible”. Stability was achieved by grooving the undersides of the stones so that they interlocked, rather like a jigsaw puzzle, with everything held tautly in place by an encircling ‘frame’. Many different colored stones, particularly marble, were used, along with semiprecious and even precious stones .It first appeared in Rome in the 16th century, reaching its full maturity in Florence. Pietra dura items are generally crafted on green, white or black marble base stones. Typically, the resulting panel is completely flat, but some examples where the image is in low relief were made, taking the work more into the area of hardstone carving.