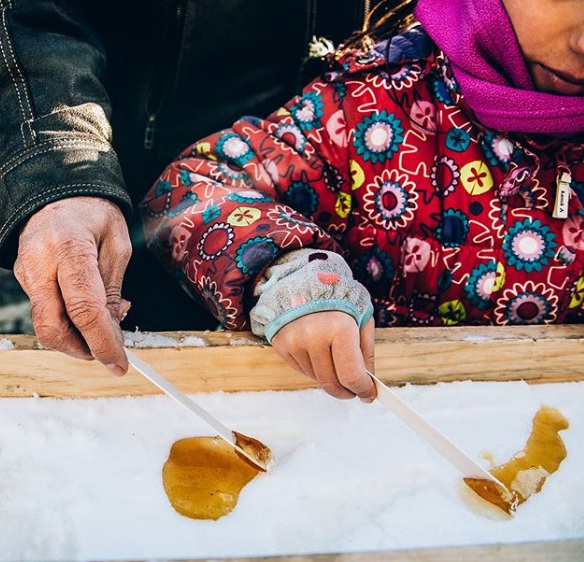 As we find ourselves at the end of a long and brutally cold winter that is still not ready to leave us behind, the only light at the end of this snowy tunnel is the taste of sticky, sweet maple treats. With late March here and Canadians rejoicing about the (eventual!) arrival of springtime, maple syrup fever has officially taken over the countryside of Quebec. Whether taking a road trip from one of Canada’s eastern cities or exploring the beautiful province of Quebec after a Montreal weekend, there are hundreds of sugar shacks to explore in the area, each with their own delights. Prepare to slip into your red checkered shirt and take a ride on a horse drawn carriage as you celebrate one of Quebec’s sweetest traditions. As the period to fully enjoy this sugary wonder is rather short and typically lasts from March to April, here are a few suggestions of rustic shacks to visit in the coming weeks.

Situated on the edge of the St. Lawrence River and in the maple grove, La Sucrerie Blouin is found in a woodsy area of Quebec that is said to leave you breathless. Family-operated, this authentic shack offers tradition with a view. With its red tinted roof and rural dining room vibes, the ambiance aims to fit in with Quebec’s old-fashioned charm. From sleigh rides and folk music to classic maple infused dishes, La Sucrerie Blouin claims to provide a homemade taste of the Canadian ritual.

Nestled in an enchanting setting of Lac-Beauport, this year-round sugar shack brings you the sweet goodness of maple even in the dead of winter. Known for its museum, Érablière du Lac-Beauport offers visitors a short history lesson on their favourite drizzled ingredient, starting with the discovery of maple sugar water all the way to modern boiling techniques. After working up an appetite through their journey into Canada’s most popular delicacy, sugar shack visitors can indulge in their all-maple menu, featuring signature items such as maple flavoured brown beans with pork and maple ham. For the non-meat lover who still has a sweet tooth, Érablière du Lac-Beauport has also crafted a vegetarian menu.