As the founder of Toronto-based label House of Poplyn, creative director Tanushree Pande unveiled her edgy Royal Punk collection at FAT (Fashion Art Toronto) 2015 on Saturday, April 25. We chatted backstage with the emerging designer, who was born in India and lived in South Africa before she launched her brand in 2013. Here’s what Pande had to say about the inspiration behind her avant garde looks, favourite fashion memory and her journey into fashion design.

Real Style: How would you describe House of Poplyn’s designs?

Tanushree: My brand is all about not being afraid of using colour and texture, be it winter, fall or summer.

Real Style: What is the inspiration behind your latest looks at FAT 2015?

Real Style: What is it about microorganisms that influenced you to create this collection?

Tanushree: I have been a bio student in school, even though I did fashion design later. I had this in my mind for a long time. When you see diagrams of microorganisms in biology notebooks, they are amazing, with so much colour. I wanted to do something big, because this is the tenth anniversary of Fashion Art Toronto.

Real Style: You were originally studying biology! What inspired you to pursue fashion as a career?

Tanushree: I was! My father wanted me to become a doctor, so I was in bio. I was actually pretty interested in bio. But then, I was always interested in costume designing more than fashion design. I think that trying to make costumes for school plays kind of transcended, by the time I realized that there was a career that I can go for. I just chose fashion design.

Real Style: As an emerging designer, who are your favourite fashion influencers?

Tanushree: For fashion influencers in Canada, I have been seeing Mikhael Kale’s range for the past two years and I like him. In terms of fashion mentors, who I grew up watching and wanting to be, I would say Alexander McQueen. He’s everybody’s inspiration! I’m from India, so we have an Indian designer, Manish Arora. Everything he does, from the initial collection that I’ve seen to the time that he’s now in Paris, is absolutely gorgeous. He’s the one who tells me to try to push my boundaries and just try things beyond wearable, and just make them work as art.

Real Style: What is your best fashion memory?

Tanushree: My best fashion memory is when I started working after college. At my first job, I was working for this company and designing menswear, T-shirts and denim for Lee, Wrangler and Tommy Hilfiger. The first time I actually saw someone wearing that T-shirt in a mall, I was like “Oh my god, that’s my design.” That’s my best memory ever.

Real Style: Do you have a favourite piece from your new collection?

Tanushree: I have a dress, which actually took me two months to finish. It weighs more than five pounds, it’s all hand sewn and there are approximately 5,000 little felt pom-poms and 1,000 glass beads that have gone into it. It’s my favourite. There’s a love-hate relationship, because it took forever to be done. In the middle, I just wanted to be done! It’s turned out to be amazing, it’s one of my best looks. 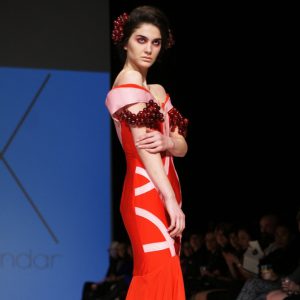