What hasn’t Karl inspired? The venerable Chanel designer’s influence in fashion, art and culture is now spreading to the stage.

Lagerfeld and his ultimate muse, Coco Chanel, are the inspiration for a new version of Jean-Philippe Rameau’s 18th century comic opera, Platée.

The production, which premiered in Vienna last week, is now showing in Paris, with shows set to follow in New York.

The original story, created for one of the Dauphin’s of France, follows the story of Platée, an unattractive nymph, who becomes the victim of a cruel plot contrived by Jupiter to castigate the jealousy of his wife Juno with the help from Olympus and the raging elements.

The new version of the play finds Jupiter made in Lagerfeld’s image—complete with a white ponytail, dark sunglasses and black suit. Of course, he makes his entrance ascending down Chanel’s famous mirrored staircase. The character of Juno is set to resemble Coco Chanel, who is dressed in head-to-toe tweed, while Platée is portrayed as the ultimate fashion victim. 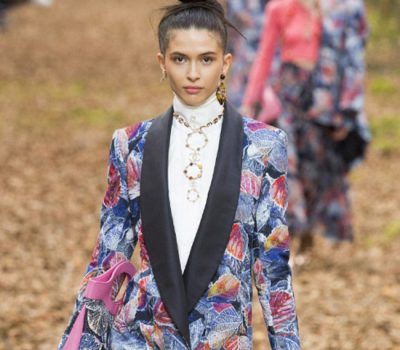