Paris Fashion Week Shines On In The City of Light

Paris Fashion Week has taken over the city of light and love with heavy doses of the very glamour the French city is synonymous with. See our recap of the hottest Fall 2012 fashion shows from the Paris catwalks:

Keeping it simple and modern was the See by Chloé collection, where minimalism was clean and pure. Chloé’s secondary line show was full of nudes, white and other simple solids with the odd spicing up through rusts and jade green. Varying transparencies kept the look light, while polished separates like  tops and dresses in silk georgette, viscose, and silk were juxtaposed against rougher, heavier fallish toppers. All in all, See by Chloé was a solid, easy to interpret display of tidy outfits. Watch the See By Chloe show here:

Making more of a statement was the striking Dries Van Noten show. Many designers (Proenza Schouler, Jason Wu) have proven an Asian influence is a big hitter for fall 2012 and Dries was no exception- although he did it with an unexpected flourish. Primary colours formed asian-inspired prints, turning up in menswear cuts and suits, pants and jackets. Fantastical dragons and creatures emblazoned more serious silhouettes, for an eye-catching contrast. Extreme-tailored pieces still seemed convenient enough to imagine as the backbone for a cutting edge new fall wardrobe. Watch highlights from the fashion show here:

Perhaps the most ambitious, memorable collection thus far in Paris was Nicola Formichetti’s for Mugler. Starting off with snowy white, slick-meets-nymphlike peplum adorned neoprene and fringed pieces, the Mugler collection took our breath away. We kept seeing mighty white fairies of the future dancing in our heads as leaf-like laser cutouts and over the top shoulder volumes came together in an unexpected harmony. The angles were unusual, the natural elements were infrequent and subtle but lingered in our minds. A drop of quenching tangerine cleansed the palette between look after painfully beautiful look in achromatic jet black and smooth white. Three words- but a dream. See the Mugler show here: 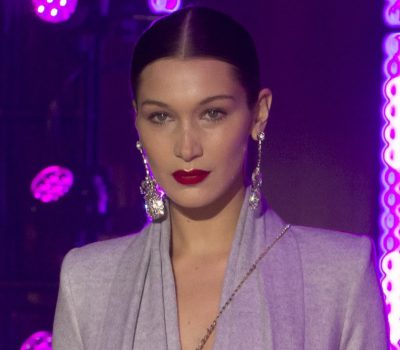