Kristen Stewart has been named the new fresh face of Chanel. The buzz worthy news broke at Chanel’s Métiers D’Art Paris-Dallas show in Dallas, Texas at Fair Park last night. The celebrity was spotted sitting pretty in the front row of this event, and it comes as no surprise that she was chosen for this coveted role as she is rumoured to have a great relationship with illustrious designer, Karl Lagerfeld. The actress stunned in cool and chic Chanel separates from the fashion houses Spring 2014 collection, and her outfit perfectly complimented the Americana inspired range that took to the runway.

Kristen Stewart is said to have first met the designer in January 2012 during a photo shoot in Paris, and since then she has been spotted wearing Chanel for various public appearances.  Despite her very public and tumultuous journey with former flame Robert Pattinson, Kristen was in attendance at the Chanel show during Paris Fashion Week and even paid a visit to Coco Chanel’s apartment.

Although the campaign has not been shot yet, there is a lot of buzz surrounding beauty’s newest face. A close and personal friend of the actress divulged to Hollywood Life that “Kristen is a huge fan of Mr. Lagerfeld and was honored to be invited to such an extraordinary fashion event. She loves his style and quirky sense of humor. He gets her and she loves him for that.” We are truly excited to see what Chanel has in store for us, and we’re thinking that the campaign will be slightly edgy and effortless just as Kristen is. 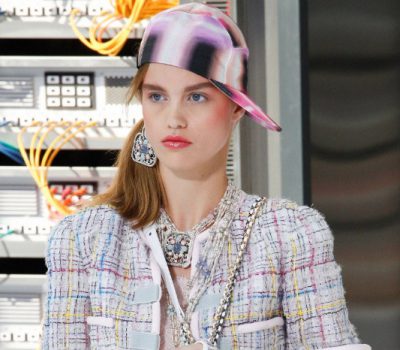