Best Nails From The SAG Awards 2013

If you thought nails were big in 2012, they’re even more of a style statement in 2013 with everyone from TV’s most beloved stars to Oscar-nominated actresses rocking intricate nail designs on the red carpet. Last night’s Screen Actors Guild Awards had some of the most playful nail designs we’ve seen yet. Here are our favourite nails from the 2013 SAG Awards.

Busy Philipps bedazzled her nude nails withgold and yellow gold-coloured jewels on just the index finger and pinky finger of her right hand. We love how fun and yet subtle her dazzling nails are.

Modern Family’s Sarah Hyland is almost becoming as famous as Zooey Deschanel for rocking playful nails. The brunette beauty rocked a baby pink shade of nail polish that was semi-translucent and bedazzled each nail with one diamond gem at the base.

Anne Hathaway was an absolute vision last night in her black Giambattista Valli haute couture gown. Instead of opting for a traditional polish, the Best Supporting Actress winner painted her nails white and added a black bow design to her index and middle fingers. 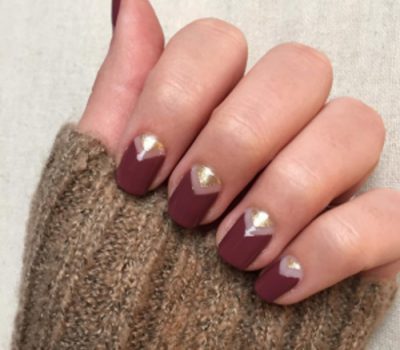 Our Best Tips For Nailing A DIY Manicure

Get The Perfect DIY Manicure At Home